What is your worst drunk? [Crazy Sobriety Vlog #10] 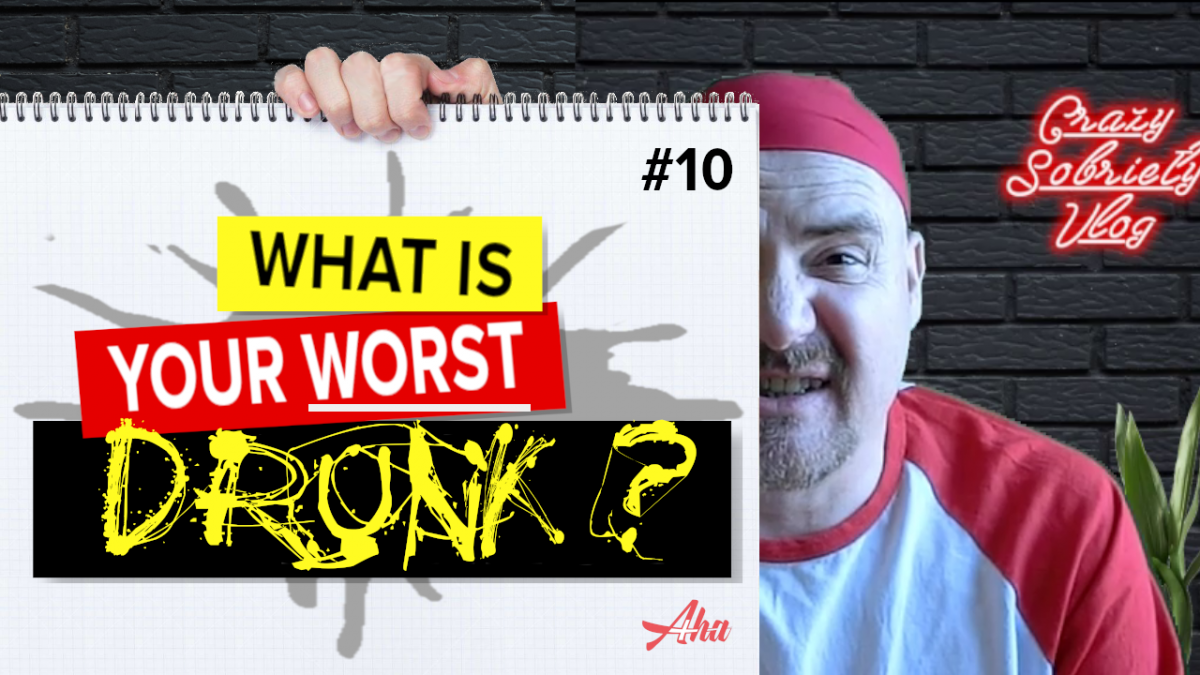 Morning and welcome to the Crazy Sobriety Vlog and today’s question is, What is your worst drunken experience?

In my 20s, on a particularly depressing weekend, I just decided to follow what they did in the movie. The movie was Nicolas Cage’s, Leaving Las Vegas.

In the movie, he decides to drink himself to death. That sounds like suicide, doesn’t it? I mean, in the movie, it was.

I literally started drinking in the afternoon and then just carried on into the next day, through the night. That night it was literally, “I’m just not going to stop drinking.” And the purpose was to get beyond drunk.

I ended up in hospital.

I got very paranoid around the afternoon of the next day, and I thought I was going to fling myself out of a second-storey window. That was a bit scary.

I said to him, “Call the AA,” which is the worst blinkin’ thing to do.

I know that sounds counter-intuitive because I’d often gone to the AA for help, but when he called them, do you know what they told him?

They said, “Don’t do anything. Don’t help him. Let him solve it himself. It’s his problem. Don’t you take on board his problems.”

That’s what they told him.

I was really desperate for help. I thought they’d give you some advice about how to treat someone who’s suicidal.

But they were like, “No, don’t get involved, mate.”

I’m not a big “AA” man, as you probably can tell. What advice do they give anyway? Everyone’s got so many different experiences of alcohol. Everyone who’s drunk, has drunk for different reasons, right? So is their advice applicable to someone else?

Toss a coin: Maybe, maybe not?

Advice you can Trust

The only real advice you can trust is research, experiments, or surveys, or [where] enough cases have been looked at that you can actually reliably base judgement on the data.

That’s what I did try to do in my book. I’ve got over 300 academic references in that book. It’s purely based on research.

My big criticism of “Quit Lit” books is that they don’t use any research.

Primary research means the original journal paper that was written by the scientists, that’s the original paper [source]. That’s what my book contains references to, but not websites which go, “I think [xyz] based on what I thought the researcher said”. Oftentimes, that’s wrong.

And I’ve seen self-help books where they just quote websites because they don’t really know any better. However, I’ve always got to say, I’m not having “a go” at these authors, or those books, because I’m sure they’re well-meaning. I’m sure that they’re coming from a good place and they probably don’t know better, it’s just very frustrating.

I had an argument with a guy on Facebook. Ok, I had a massive “go” at some guy on Facebook. He was saying the reason for urges and cravings is, actually, the bacteria in your gut. I was like, “You Foo…[l]”

First of all, I said, “That’s very interesting, where did you read that?”

And then he started getting all lairy, “I’m not your mummy. Why do I need to tell you where I got it from?”

And then he sent a screenshot of some [website description.]

No, [first], he said, “Just google it. You can find out. Google it. It will be easy to find out. Find out in eight seconds if you google it, but you’re too lazy!” That’s what he said to me.

The problem is, right, if you’re dealing with alcoholics, they’re often Nuts! I know I was, I know I was.

But you’ve got to be really cool, cool cucumber counsellor, don’t you?

“Okay, so I’m lazy,” I said, “and I’m being unreasonable for asking you where you got that information from.”

Anyway, I checked on his website, on his Facebook page, and he’d only got one post on there: “Dear God, please help me cope because I can’t stand losing another person in my life.” Something like that.

And I was like, sh*t… Maybe he’s just lost someone close to him, and I shouldn’t be so judgmental.

Sometimes I suppose you just got to understand that people are in different circumstances, and different stages of their alcoholic condition. [ Like I was, in the hospital ].

Anyway, back to the question.

My brother, after he called the AA, and they were useless, I said, “Okay, call the hospital.”

That was the only thing I could think of. And then the ambulance came round and there were two paramedics. And I was doing all this hyperventilating. I didn’t know what the f*ck was going on. My mind was totally all over the place.

They put me in the back of an ambulance. She said straightaway, the paramedic, “he’s having a panic attack!”

And I didn’t know, what’s a panic attack? I haven’t got a clue what that is. But they put this thing over my mouth, presumably to give me some oxygen or something, and drove me to the hospital.

I was triaged with my brother in a little side room. And someone came in, saw me and said, “Wait for the specialist to come.”

And that was waiting for hours.

I wasn’t committed. I could have been sectioned. “Sectioned” is, I am sure you know, when they force you to stay against your will. But I hadn’t told them I was suicidal.

Now I’m sure I would have said I’m not. If you say you’re suicidal, that’s sectionable. That means they can force you to stay but, even now, I don’t think I was suicidal.

Maybe it was just a cry for help.

I don’t know know whether it was co-morbidity, depression linked with alcoholism, or alcoholism alone. I don’t know.

Have a good day, guys.