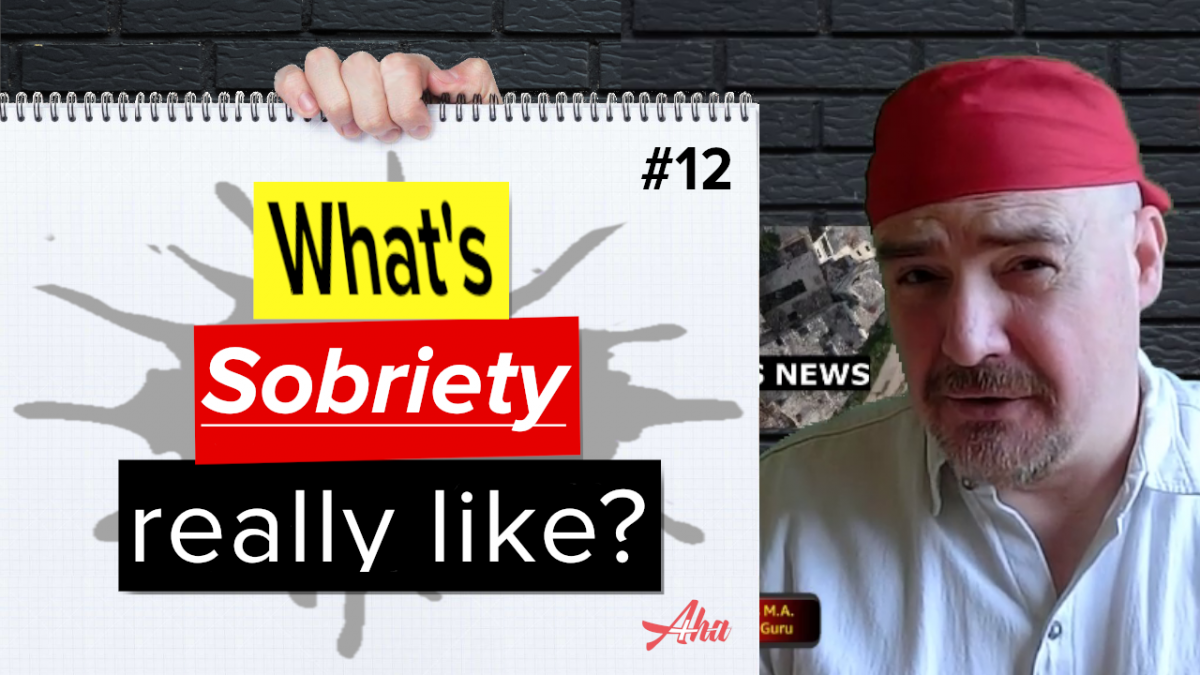 If you have been drinking so long you’ve forgotten what it’s like to be sober and face reality, Mark Holmes, Alcohol Quit Guru, explains the honest truth with reference to co-mobordity, alcoholism, anxiety and depression.

Good morning, and welcome to the Crazy Sobriety Vlog and today’s question is, What’s sobriety really like?

There has been devastation throughout the land.

There are ghosts from the past haunting the streets, upturned cars and uprooted trees lie all about. We don’t know the cause of this Apocalypse, we woke and suddenly saw the dawn of a new day.

Oddly, our heads are clear? But the ruin that surrounds us in the crumbled buildings and empty streets where nobody knows us, indicates that something must have happened, quite terrible and devastating, while we were asleep for a long, long time.

Yeah, that’s what it’s like, suddenly being sober after years [drinking].

It’s a bit like waking up sober after there’s been a house party in your house, and you’re just looking around and you can’t believe it. Everything’s a bit of a mess. When you get sober don’t think suddenly everything’s going to be rainbows and unicorns.

I love rainbows and unicorns: (Overenthusiastically) “It’s fantastic! You can do it! You can be sober. We’re going to show you three super techniques today to be the best sober man in the whole world!” (They don’t make a fool of themselves like that, in their videos.)

I’m not gonna mention his name, but there’s one guy who is Super Positive. He is so positive, he will tell you, “I am so positive. There is no catch, I’m a coach. I’m a coach, I can tell you, I’m positive!”

And you got another one who is like, “Listen to me, I’ve been a radio presenter all my life, so I can tell you, you need to focus and get over it. Stop making yourself into an anti-hero and be the hero that you always wanted to be.” And I’m not going to mention his name, either. He’s not that bad actually, I’m probably just jealous.

I feel like I’m in a mad mad world, and I’ve become a freak by writing this book. It is strange company I keep.

At the other extreme, you’ve got an academic who’s got no interest at all: “Yes, yes, you’re probably going to die. I think your liver is in a terribly dysfunctional state. Make your peace with the world. Cheerio. And good luck!”

However, it’s approximately 10 million times better than being drunk.

Before, when you’re drunk, you don’t even notice that the apocalypse has arrived outside your house, and all the cars are overturned and the buildings are crumbling. They are, but you don’t notice it.

You’re putting a rather large plaster over, over the gaping wounds of blood gushing out from all over, in every direction from, your body. And you’re going to wake up, you’re going to go, “Oh. Wow. Okay. So this is what it’s like.”

The Most Ironic Thing Of All

Because there’s a different type of stress you’ve got when you’re drinking. It’s not the same sort of stress. When you’re drinking you really have stress. This is a total irony, isn’t it? Some people drink because they’re anxious or depressed  – And I write about this in my book, Holmes’s Complete Guide To Stop Drinking Alcohol – but drinking actually causes anxiety and depression. The most ironic thing of all, that’s the truth of it.

So whatever stress you’re using alcohol to cope with – that stress or anxiety or depression or whatever it is, you’ll find it easier [to cope with not drinking]. There will be less stress.

The anxiety might still be there if you’ve got an underlying generalised anxiety disorder [G.A.D.], that can still be there. In counselling we call it co-morbidity.

You can’t really do anything about depression or anxiety until you are not drinking because the drink is a kind of self-medication, it’s going to get in the way of any treatment of the other things.

So be aware, a little bit, of well-meaning coaches, “Come on, you can do it.” Just be aware that it’s not always that simple.

Now why do I say in my book that it can be easy? Because I lay the foundation, and I have considered all these other factors from a therapeutic point of view. Often there’s no therapeutic basis for some of these “quit lit” books. There’s no kind of foundation or philosophy behind what they’re saying, they’re just very vacuous and vague. It’s a bit like going into an AA meeting.

There’s a place for AA meetings, but that’s not research. That’s just one person’s bias or prejudice. And really, to be honest, counselling shouldn’t be about someone telling you anything anyway. If someone’s telling you, “this is what you should do”, that’s not counselling.

So all those self-help, or “quit-lit” kings and queens, treat them with a little bit of caution, please. Counselling really is finding out from you, what you feel are the causes, the triggers, and strategies that are right for you.

There is actually evidence that CBT can be effective in a self-help book. A lot of these other “quit-lit” strategies are not CBT. The most effective strategy, though, Number one is counselling, because that is you telling the counsellor whatever, not a counsellor telling you anything. It’s really, “What do you want to achieve? How are you going to achieve it?” And facilitating your journey and development with very careful probing questions to gain insight, and gentle, compassionate, loving guidance.

So what is it really like being sober? It’s really like coming into the place where the party was the night before. After the apocalypse, you’re walking around, you see the destruction that you’ve gathered for years and years and years, and you’re kind of looking at it with fresh eyes.

I put “happily married” in my book, at the end of it. That was a bit optimistic!

If you’ve had relationship issues while you’re drinking, you’re probably still going to have them afterwards. And if you met the person when you were out of it, you might have to work out new ground rules, or, face up to the person they really are, when you’re sober.

So the problems aren’t all going away, but you should hopefully feel stronger. And that’s the weird thing. You are stronger.

I can’t imagine myself doing this vlog when I was drinking, even though, I would have said to you, “oh, yeah, I can do a little Vlog!” Because you’re overconfident, you think “I can do anything.” But you’re actually enfeebled rather than ennobled. You’re in an illusion that the world is fine while you’re drinking, but it’s not.

Your head’s in the sand. You’re not looking at what is really there.

You’re doing your best to cope, and it’s the best, the absolute best, that you can think of. Because you’re a very sane, rational human being, you’re not an idiot. And you’ve got strong willpower. In your rational head, you’re doing everything the best you possibly can. So don’t get me wrong, I respect that. But sobriety, really, is like taking the blinkers off, and it’s much better.

But you don’t see me doing pirouettes, I’m not going to be a ballerina. And I haven’t won the lottery. I still struggle. Being an alcohol counsellor is not exactly Wall Street!

Because if you have got other issues then you can start to deal with them, which you could never do before.

It’s almost an overwhelming state of being, constantly on your shoulders. That dissipates, that’s all gone. My headspace is back. And now I can address each of these things. And if I get depressed, I can address that. I can actually begin to deal with that and get help. It’s a start.

That’s the best thing I can say.

It’s worth it, mate.

And I’m not just trying to sell a book: Holmes’s Complete Guide To Stop Drinking Alcohol available now on Amazon.